Angel Snot — The Green Slime In Your Driveway 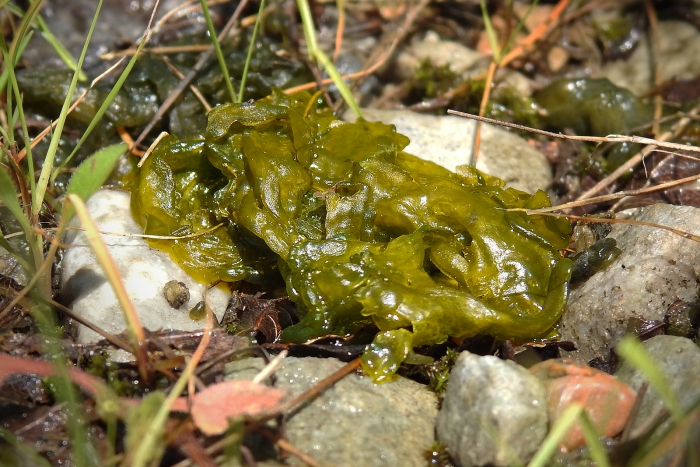 Driveways are among the most lifeless places on Earth.

They’re gray, they’re uniform, and they’re barren — in no small part because some of us take drastic measures to ensure that these conditions persist.

Driveways are forgiving, however. Despite every obstacle thrown at them, and against some of our more pernicious wishes, they achieve the seemingly impossible.

A closer look at even the most chemically laden driveway will reveal the presence of life. Such life could be bryophytic, herbaceous, or even animalian.

To those of us whose driveways are composed of gravel, another sign of life routinely makes an appearance. It doesn’t look bryophytic, herbaceous, or animalian. Instead, it looks like jelly.

Its name is Nostoc commune.  Some people call it Angel Snot or Star Jelly.

Such a gelatinous blob might alarm us with its sudden appearance after a rainfall. Given enough time, and given enough appearances, we may eventually begin to wonder about its origins and repercussions.

I recently spent an afternoon exploring a gravelly habitat, and while I was there, I encountered this gelatinous creature. With a camera in hand, I decided to film a brief video. If you are interested in learning more about this slimy organism that may be living in your driveway, check out the video!